New neighbors just moved in. Not next door in the empty house, but in our back yard. Bird neighbors, that is. Souimanga sunbirds (Cinnyris sovimanga) to be exact.

Jemma, our Labrador retriever, was pointing at a La Faza in the back yard a couple weeks ago. La Faza is the Malagasy name for the Madagascar yellow palm. Jemma doesn’t point very often. She usually doesn’t show much in the way of being a hunting dog.

But the dog was pointing. Unusual. I looked. She had found a small bird nest about a meter (three feet) above the ground.

“Good girl, a nest.” Jemma tried to take it in her mouth. “Leave it. That’s my nest.” I stood between her and the nest, claiming it. Her expression said, “You’re crazy, no fair, what do you want with that nest, I want to taste it.” Jemma’s a very expressive dog.

She left it, though. I scratched behind her ears, “Good girl.” Jemma and I have lots of conversations about all sorts of topics, not just about leaving some things alone.

Took some patient watching before I finally met the new neighbors. Two small birds with curved beaks just a bit bigger than hummingbirds. One rather drab in color, the other with a shiny, dark green almost black head and shoulders and a yellowish belly. A lengthy web search revealed them to be sunbirds.

Dad Sunbird is kind of fast, so I don’t have a picture of him, yet. But here’s the rest of the family.

Souimanga sunbirds are indiginous to the Indian Ocean Islands of Madagascar, the Aldabara Group of the Outer Islands of Seychelles, and the Glorioso Islands.

I’d never heard of the Glorioso Islands. They are a total of 5 square kilometers located about 160 kilometers (not quite 100 miles) northwest of Madagascar. France owns them, but Madagascar, Comoros, and Seychelles claim them. But back to the birds.

The drably colored ones are the females. The females handle the nest building and incubation of the eggs. Sunbirds breed from August to March. Two eggs are laid and incubated for about two weeks. The females handle most of the feeding of the chicks, but the males help. From what I’ve seen, Dad Sunbird spends most of his time looking good, sipping nectar from flowers, and singing. Rough life for the fellas, eh?

Lychee season has broken out in Toamasina and it’s a big deal for the local economy. And colorful. And tasty.

Drive By Shooting To Antananarivo

Day 7 of an April-May 2014 trip to Madagascar’s Highlands. Driving Antsirabe to Antananarivo on Route National 7. 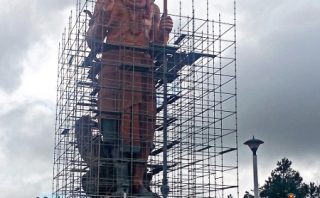 Shiva, the destroyer, stands 108 feet tall (33 meters) above the lakes and temples. But don’t be afraid. He’s smiling. 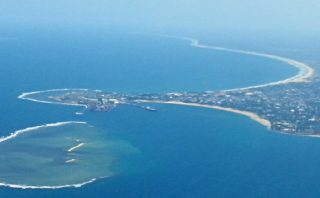