Looks like over a hundred people gathered around a building in town. And another hundred plus by a nearby warehouse. It’s not some sort of protest or demonstration. They’re haphazardly queued up to see about a job. Lychee season has broken out in Toamasina. And it’s a big deal.

The bright red fruit punctuates the nearly monochromatic green along Route National 2 in and out of town. Piles of lychee are in the markets and on the tables at roadside stands. Lychee rinds are everywhere underfoot along the roads and in the markets. Basket full after basket full are brought in from the countryside by pousse-pousse (bicycle rickshaw), hand truck, tuk-tuk (motorcycle rickshaw), automobile, and truck. Trucks going in and out of packinghouses snarl traffic. Buses line up in various spots in town taking workers to and from the day and night shifts at the many packinghouses. Ships in port are loading containers filled with boxes of the fruit. Impromptu markets selling food and drink to the workers spring up outside the packinghouses. A very big deal in Toamasina.

I go back and forth on whether to say Toamasina or Tamatave. Officially, the city’s name is Toamasina and has been ever since edicts in the 1970s when place names in Madagascar were changed to Malagasy from French or English or whatever they were. But just about everyone calls the town Tamatave. And Tamatave is easier to say. But back to lychee.

All About Malagasy Lychee

Lychee was first cultivated in Madagascar in 1870. Today, Madagascar is somewhere around the fourth largest producer of lychee in the world growing somewhere between 75,000 to 100,000 tonnes annually. A quarter of this is exported to Europe for the Christmas season – about half to France and the remainder mostly to Germany and the United Kingdom.

Almost all of Madagascar’s lychee is grown on the east coast. The season starts in November and runs through December and sometimes into early January. In just six weeks or so of lychee season, many local folks and farm families earn almost all their money for the year (between 50-80% of their annual income).

There are the some 20,000 farm families who make money from the lychee. They grow it in orchards that are typically under a hectare in size (2.5 acres). Lychee earnings also go to the lychee pickers, those that transport it to the packinghouses and markets, workers in the packinghouses, workers at the port, people selling food and drinks to all the workers, the folks working at the gas stations keeping the trucks and buses fueled, and on and on.

All About the Fruit

Lychee is a tropical to subtropical evergreen tree that grows from 10 – 28 meters tall (33 – 92 feet). Lychee fruit is about the size of an oblong golf ball.

I bought some lychee yesterday from those adorable little girls in the photo above. Lychee is harvested in bunches with some of the branch still attached kind of like grapes. As they dry, they turn brown.

The lychee rind is hard and bumpy. You peel off the rind and eat the white flesh inside. The white flesh is called an aril. That’s good to know for Scrabble and for cocktail party or airplane conversations. As in, “You know, aril, that white fleshy part of the lychee?” “The what?” “Lychee, the tropical fruit, you know, it’s kind of like rambutan.” “Like what?” “Oh, nevermind.”

There’s an inedible seed in the middle. To me, lychee tastes floral not fruity. Lori says it’s sweet and sour. If you don’t eat them masaka (ripe), they can be bitter. Make sure they’re red.

2 Comments on "Lychee Outbreak in Toamasina"

Rajery on the Bamboo Zither

Who on what? Rajery is a musician. He plays a zither made of bamboo and strings called a valiha. Recently, Rajery performed at Ocean 501 in Toamasina, Madagascar. 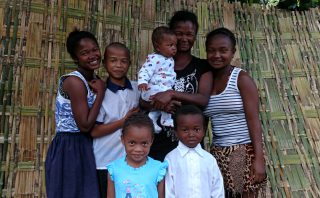 Where Be the Pirate La Buse?

In search of the pirate La Buse. At one time, the Indian Ocean was thick with pirates. La Buse was one of the most infamous. He’s supposed to be around here, somewhere.