“Madagscar poverty is up front and in your face. Like the beggars outside the grocery stores. How do you deal with it?” This was in a conversation with my friends Kim and Colin of HELP Madagascar.

Kim an Colin came to Madagascar over 15 years ago working for international aid agencies. Later, they founded HELP Madagascar (Health, Education, and Life-skills Projects Madagascar). They had some simple advice.

“Pick one person and make a difference in their life.”

Well, I didn’t pick someone. Germaine picked me.

There was a routine to going in and out of grocery stores.

On the way in, sometimes one or two people would be there with hands held out. Sometimes there’d be a mob of ten or more. Mothers with babies, children, elderly, the disabled would crowd around.

In English, “I don’t speak French.”

Chop chop took me awhile to figure out. It means food.

On the way out, I tended not to give money. Instead, I would often come out with an apple or orange for each person begging. Sometimes I would count how many mothers with children were there and then bring them each a bag of rice. Eventually I got to know the regulars.

In all of Toamasina, Madagascar’s second largest city with almost 275,000 people, there are three grocery stores. They cater mainly to vahaza (foreigners), and wealthier Malagasy.

A typical grocery store shopper might come out with US $100.00 of groceries. That’s about three months wages in a country where the daily minimum wage is about 5,000 ariary (less than US $2.00). That’s why the beggars were there. That’s also why one store had AK-47 armed guards outside, and the others security armed with billy clubs.

One day, Germaine, one of the regulars, showed me some papers from a clinic. Her son Gayëthan had an earache that wouldn’t go away. I looked over the papers – about 30,000 ariary (US $10.00). For me, US $10 didn’t seem like a lot, but was clearly inordinately expensive to someone begging for a living. I went with Germaine to the clinic and paid the bill.

Germaine’s husband had left her and their four children six years ago. She didn’t volunteer why and I didn’t pry. She hasn’t heard from him since. Her extended family lives a long ways away. So, here in Toamasina, she and her family are on their own. Fortunately, she has a home on the outskirts of town so she and her children don’t sleep in the streets like many of the grocery store regulars do. By the way, the “G” in her name is pronounced like an “S,” and her name pronounced kind of like Sarah.

A few weeks later, Germaine showed me another bill. Gayëthan still had an earache. The doctor had found an insect in the boy’s ear and they needed money for the treatment. Yes, Lori and I would help. (And, yes, thinking about this makes my ear itch).

Germaine no longer approached me at the grocery stores. I think she was nervous about the others seeing she was getting extra money. Instead, she would catch me as I was leaving my Malagasy class at Alliance Française. Somehow she had figured out when I was there. This time, she was happy. She had gotten a job washing laundry part time. However, she couldn’t quite make ends meet like for school tuition, or school supplies and field trips. There’s public school in Madagascar. Yet, people pay out of pocket for school, especially the poor. Germaine would show us the bill, and Lori and I would help.

Germaine’s first trip to the country and back was a success. She had not only earned enough for buying the beans for next time, but also for food and her children’s school tuition.

Next I saw her, she was buying beans and a frippery to take the country. A frippery is what they call a bale of used clothes.

Frippery. Now there’s a word I can’t pass on. Meriam-Webster says frippery means something showy, frivolous, or nonessential but used to mean cast-off clothe and a place where old clothes are sold. All those clothes being donated in wealthy countries to give to people in poor countries? They’ve become an industry.

Germaine’s business grew. Beans and rice out to the country. Rice, coffee beans, fruit, and whatever else in season back to town.

Was Business Too Good?

We met the next day and she described the terrible event.

The local “gang” must have noticed she and her family were doing better. In the evening, three men forced their way into her home. They took a gunny sack of dried beans and a frippery. One grabbed her purse. The purse had all her money in it. She tried to pull it away. The thief drew a knife and sliced her across the belly.

She was okay. The children were all okay. She had been to the doctor. She showed me the bandaged cut. Ouch. She said she didn’t know what to do next. Lori and I funded a second startup for her.

Before I gave Germaine the money, we brainstormed about security. Could she keep the money in a bank instead of at home? Was it possible to pick up goods before heading to the countryside instead of storing them at home? What else could she do at home to keep the thieves away?

The bank was an interesting topic. Toamasina has at least five different banks. Some have more than one location. But Germaine wasn’t interested in a bank account. That was to be expected. The World Bank figures only about 9% of Malagasy use banks. However, Germaine thought she would get an account at Western Union. Apparently, Western Union has some sort of deposit account people use. I knew of other Malagasy who did this.

Not long after this, I didn’t see Germaine very often anymore. Now and then, she’d be on her route and I on mine and we’d happen to meet. “Salama, ino vaovao?” Hello, what’s the news? “Tsysy vaovao.” No news. Then we’d talk about what was new. The children were well, and doing fine in school. She would ask after Madame. Lori was well.

Business was good again. No more thieves. Germaine was taking care of her family, covering school costs, and had enough to repair her roof.

She was also taking care of her brother’s son who was only a few months old. The baby’s mother had passed away recently from an illness. Formula for the baby was expensive, but she was managing.

She had also been going “way out in the country” to take care of the family farm. Getting there included a drive by taxi brousse (a bush taxi — public transportation via a small van), some walking, a trip in a canoe, overnight in a village, then four more hours of walking.

In Madagascar, poverty is hard work. Rain or shine, hot or cold, morning to night, the Malagasy work hard for the little they have, including those asking for money and food outside grocery stores.

4 Comments on "Madagascar Poverty and One Person"

New neighbors have moved in. Not in the empty house next door, but in our back yard. Souimanga sunbirds. 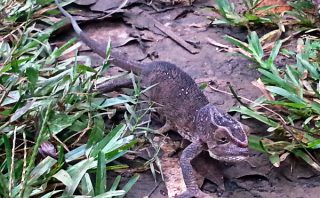 A walk on the Babakotokely Circuit at Mitsinjo’s Analamazaotra Forest Station in Andasibe, Madagascar. Mitsinjo is an association of local people doing great work for Madagascar.

Rajery on the Bamboo Zither

Who on what? Rajery is a musician. He plays a zither made of bamboo and strings called a valiha. Recently, Rajery performed at Ocean 501 in Toamasina, Madagascar.