Coffee, anyone? Our tourist pamphlet mentions a coffee shop near Jonkers Street. So begins another trek from the backpacker dorm across town and over the river for coffee and breakfast.

Calanthe Art Café serves up authentic Malaysian coffee. Malaysia used to be a big producer and exporter of coffee but not so much anymore. Each region or state in Malaysia is known for roasting their coffee beans in a particular way. Like in sugar and butter or other concoctions. There are thirteen Malaysian states and thirteen types of coffee here. The coffee is just okay.

Breakfast is also just okay. They forget Natalie’s order. She ends up with just toast. I have toast with half boiled eggs which the menu describes as a traditional breakfast. I am thinking soft boiled eggs. No, they are half boiled. Rather soupy. Slurping warmish eggs for breakfast. Natalie won’t trade me for her toast.

There are a lot of old red buildings around the old Dutch Square. We climb Bukit St. Paul (St. Paul’s Hill). We rest occasionally and admire the view across red roofs and the town skyline towards the Strait of Melaka.

We walk around the hill back towards Dutch Square. No need to go back up and over it. Besides, it’s hot. We walk by the History and Ethnography Museum in the Stadthuys. Maybe it’s cool in there. Maybe there are fans or airconditioning. We go in. This is the old City Hall and residence of Melaka’s colonial Dutch governors. The historical section shows the history of Melaka from 1400 to 1597. The ethnography section shows the cultures of the various communities in Melaka including the Malays, the Chinese, the Portuguese, and the Baba-Nonya. I spend my time cooling off and studying the models of the historic, all wood Malay palace, the A’Formosa fortress, and the colonial Dutch city. And I take some time perusing the displays of armaments and weapons used by the various sides in the many conflicts over control of Melaka.

I don’t think we can stay in the museum all day. It’s not that cool in here anyway. We walk to the Flor De La Mar, a replica of a Portuguese ship that sank on its way back to Portugal loaded with riches from Melaka (spices, tin, and silk). The ship is part of the Melaka Maritime Museum. This is a no shoes ship. Shoes are removed before boarding and exploring.

According to the version of events in the ship, Melaka was a thriving port. Merchants came from all over the known world and were all treated fairly. Europeans were attracted to the wealth to be had here. The Portuguese took the town and port from the Melakans. The Dutch took it from the Portuguese. Both managed to chase off the trade. The English took over from the Dutch and didn’t much improve things. Melaka as an important trade hub became a thing of the past.

Well, we were just in a dry docked ship. How about if we get on a boat that goes on the water? We wait in line for the Melaka River Cruise. Only a 45 minute wait. I check out bridges, buildings, people on the river walk, and new murals depicting local history and culture that are going up on a the sides of a lot of the buildings lining the river. We cruise past traditional Malaysian homes at Kampong Morten, a preserved, heritage village in the middle of the city. As we motor past a café, some fellows holler out something about “relax and have a cold beer.” That’s a good idea.

We walk along the river promenade looking for the café of proffered cold beverages. A fellow asks in Kiwi English, “Ya want a cold beer, mate?” It’s blasting hot and crushingly humid out. Yes, I want a cold beer.

Joe and his wife, Jill, are from New Zealand and run the Honky Tonk Haven Cafe. Joe cooks us a couple burgers he says are made from New Zealand’s best beef. And with a slice of pineapple added, they become tropical burgers.

The fellows at the table next two us are Honky Tonk regulars. They are the ones that hollered at us while we were on the river cruise. They have been friends since grade school. However, one has lived in Scotland for the last 35 years and is only a regular while on vacation back in Melaka. They say Honky Tonk is the best place for live music on the weekends. Joe plays the piano, Jill sings, and various locals show up and accompany.

Natalie says she has to see the beach and the ocean. We walk some more in the blasting heat and crushing humidity. We walk to the end of the river promenade, past the dock for the boats that ferry people to the nearby islands, and around a locked gate. Finally, we arrive at the beach, which is mostly rocks and litter and a little bit of sand. Melaka is not a beach destination.

We watch the sun set. And we notice a tropical downpour heading our way. Time to go. We stumble along the rocks, I mean beach, until we find a break in a fence that we could crawl through. A locked gate and now a fence. Suggestions that we shouldn’t be on the beach? Maybe. We wind our way along back streets and eventually come out in the shopping mall area. It’s 8:00 p.m., still blasting hot and still crushingly humid. So, we detour through the air conditioned mall again on the way to our backpacker dorm. We turn on our two fans full blast and lay directly under them as much as we can to try and sleep. The tropical storm comes ashore and I listen to it over the whirring of the fans. 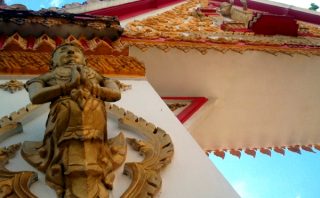 On the way to Thailand. A traveler wants to be there. But a lot of getting there comes first. 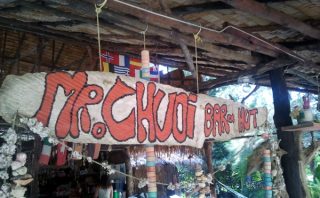 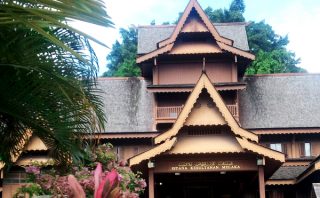 Barefooting in the Melaka Palace

Finally finding good coffee before a visit to the Sultanate Palace in Melaka, Malaysia. 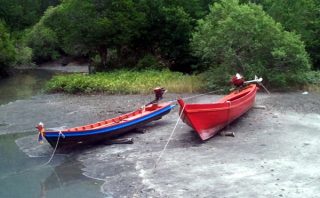 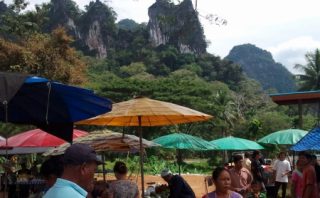 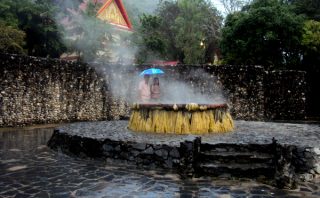